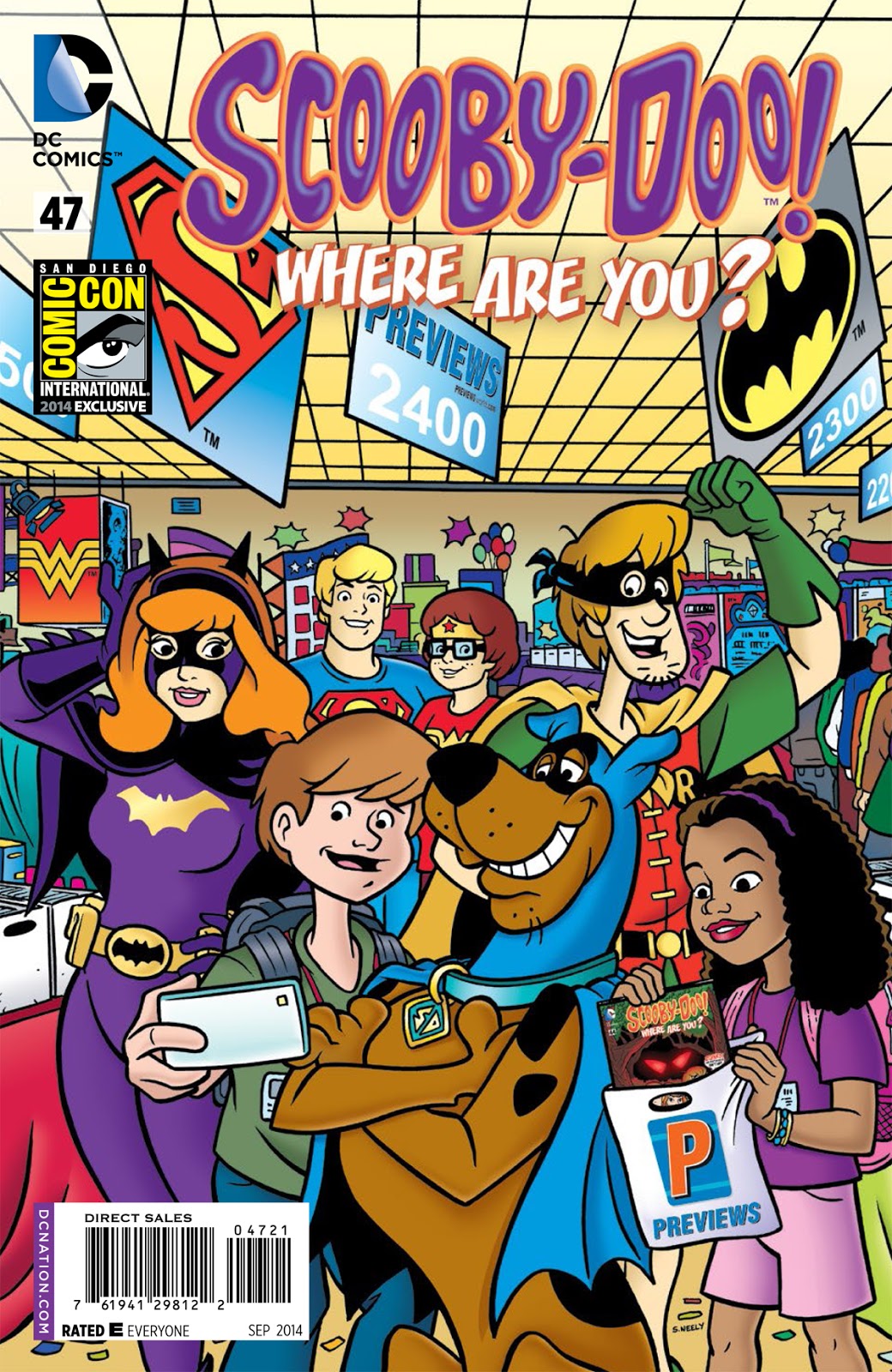 SCOOBY-DOO, WHERE ARE YOU? #47 – SDCC 2014 EDITION
(W) Sholly Fisch (A) Dave Alvarez  (CA) Scott Neely
In this issue, Velma enters a tournament of her favorite competitive trading card game. But when the Monsters from the game show up in real life, it's up to the rest of the gang to save the day! LIMITED TO 5,000 COPIES! 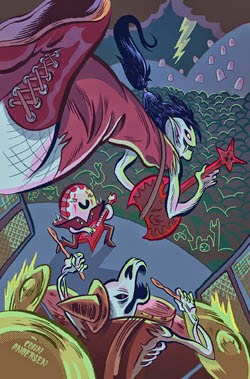 ADVENTURE TIME #30 – SDCC 2014 EDITION
(W) Ryan North (A) Liz Prince, Carey Pietsch, Rebecca Tobin, Yumi Sakugawa, Jon Vermilyea (CA) A: Mike Holmes; B: Nick Iluzada Subscription Cover
It’s a rad stand­alone Zine Special! Enjoy this crazy special as the citizens of Ooo create their own zines to share. Marceline has a lot to say about her music, Peppermint Butler has a few life tips for anyone who will listen (and everyone should listen), and Finn creates his very first journal comic. A sick homage to DIY and mini­comics culture printed on uncoated paper and made to look like a zine from the Adventure Time gang! This SDCC 2014 edition is limited to 3,000 copies. 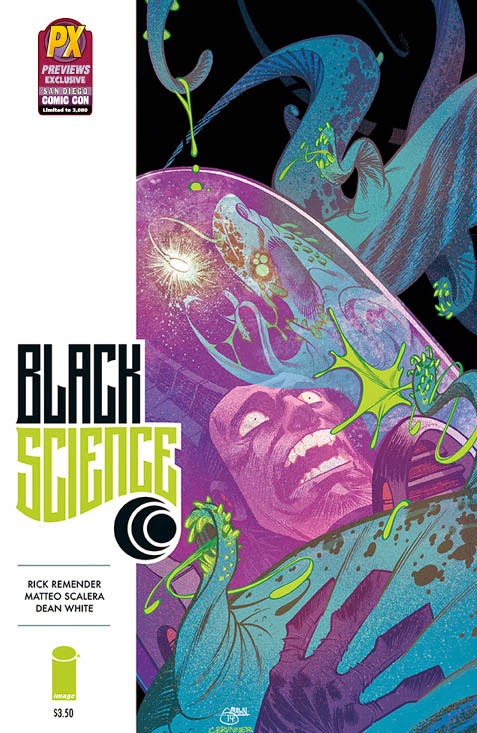 BLACK SCIENCE #7 – SDCC 2014 EDITION
(W) Rick Remender (A/C) Matteo Scalera & Dean White
The second arc of the smash sci-fi hit begins here! The mystery of the onion’s truth unfolds the deeper one travels. The mythology of the Eververse unveils new truths and new dangers. The team is hurled to a seemingly alien world that holds the key to their true purpose. For what is magic but science that we don’t yet understand? This SDCC 2014 edition is limited to 3,000 copies. 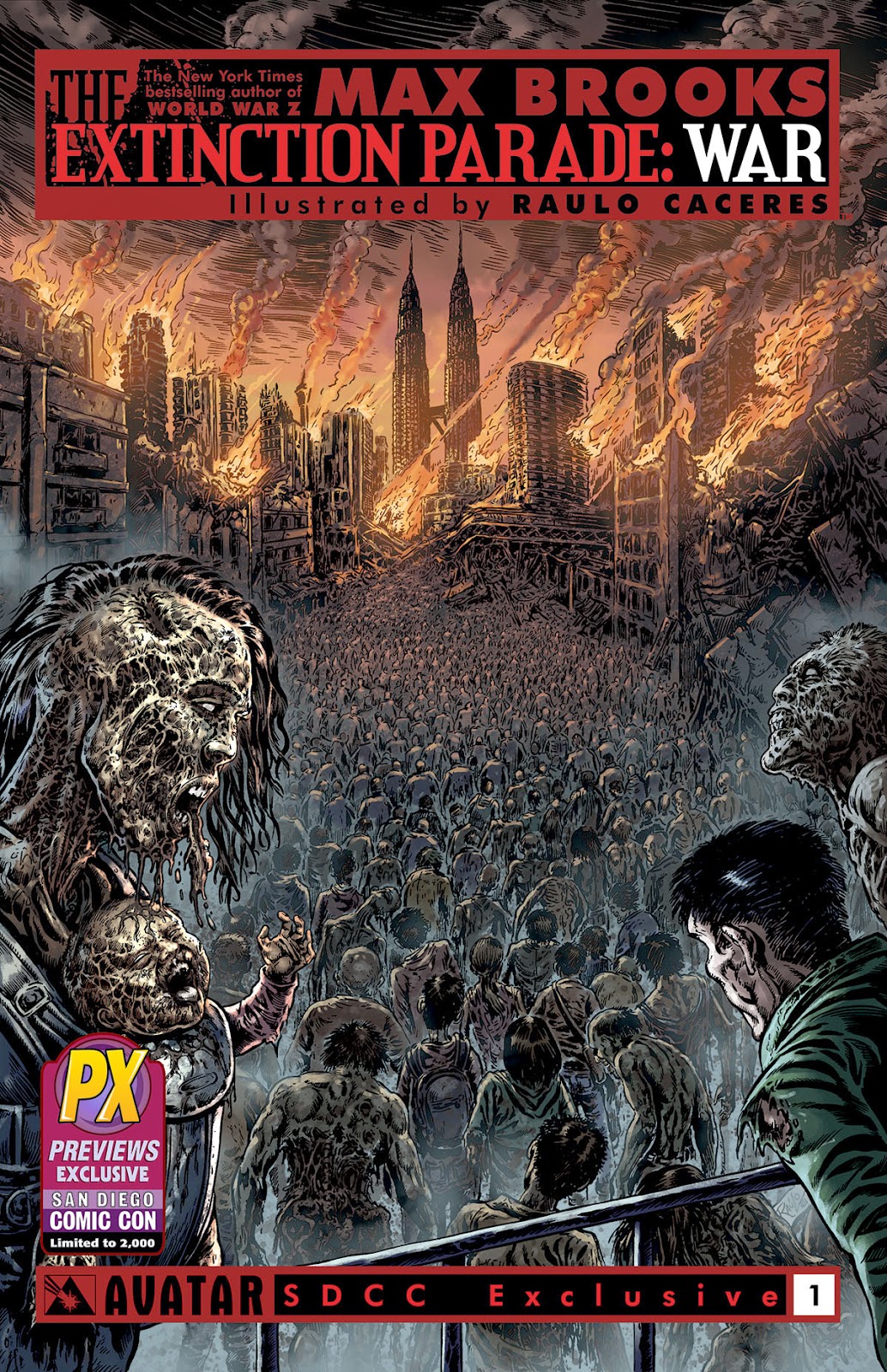 EXTINCTION PARADE: WAR #1 (MR) – SDCC 2014 EDITION
(W) Max Brooks (A/CA) Raulo Caceres
Max Brooks returns to the frightening world of zombies versus vampires in his groundbreaking follow up series: Extinction Parade: War! The subdead were always a joke to the aristocratic vampire race. Just a speck on the radar of their immortal lives, nothing worth even a moment’s notice in their quest for self-gratification through the veins of their host, the human race. But at last they have been pulled from their ignorance into the reality of the world. The human race is facing extinction and should they succumb so too shall the vampires disappear beneath the waves of rotting walking dead. Extinction Parade: War opens the doors to the next violent chapter in Brooks’ epic tale with an oversized issue starting the all-out battle for the survival of the races! This SDCC 2014 edition is limited to 2,000 copies. 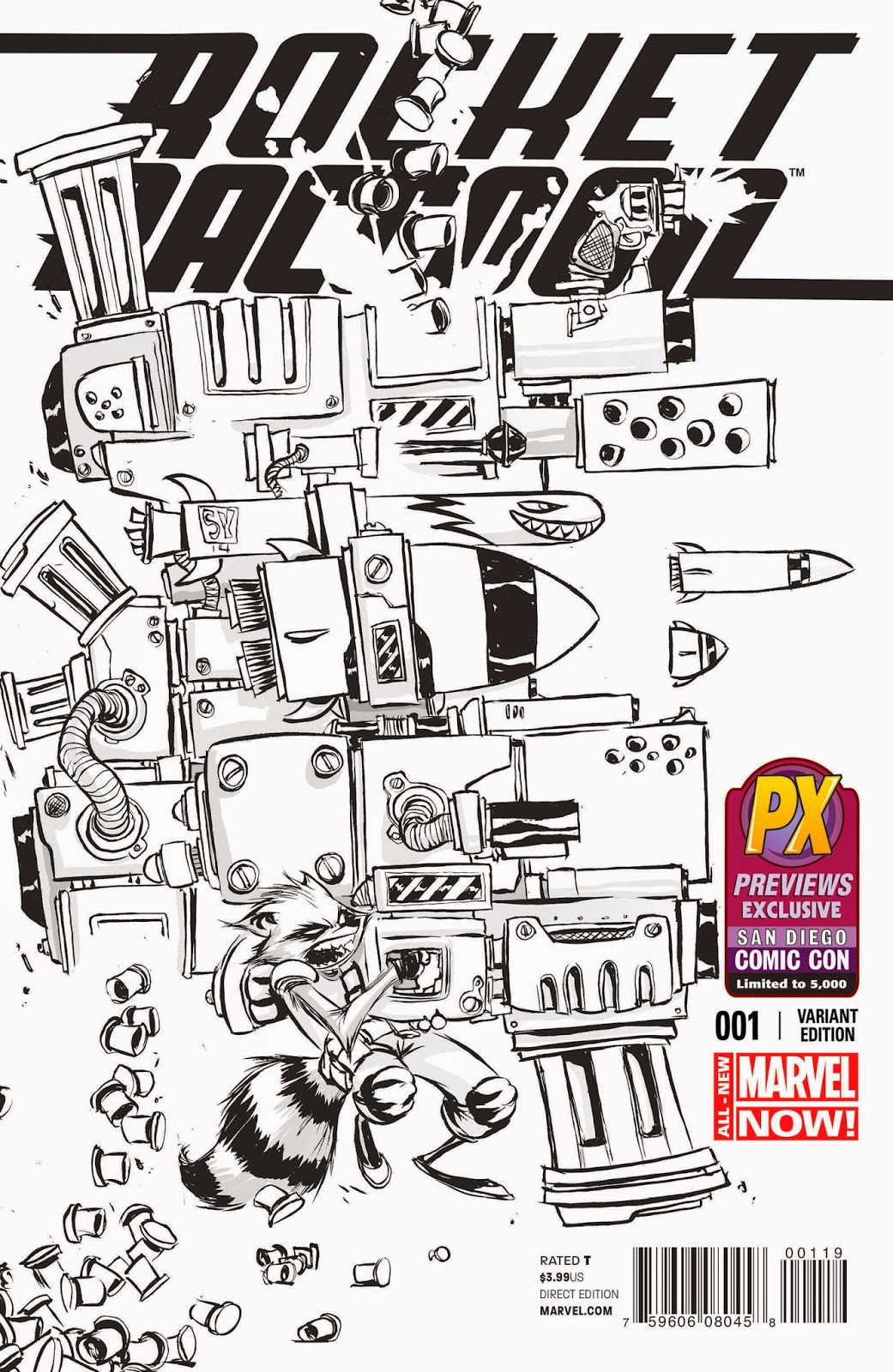 ROCKET RACCOON #1 SKOTTIE YOUNG B&W VARIANT – SDCC 2014 EDITION
(W/A) Skottie Young
As defenders of the cosmos go, Rocket Raccoon has faced his fair share of galactic battles. He’s been a hero to the weak, a champion of good, a protector of the innocent, a heartthrob to the many intergalactic female species and now — a raccoon on the run?! (I’m sorry, I’m sorry, a “formidable-and-expert-Guardian” on the run. Rocket is NOT a raccoon, okay?) Rocket’s high-flying life of adventure and heroism may soon be a thing of the past when he becomes a wanted man — and the authorities are not the only one on his tail! (We’ll definitely be overusing that pun!) Superstar creator Skottie Young brings his A-game as writer and artist on the series we’ve been waiting decades for. Because let’s be real, this is the only Guardian of the Galaxy you actually care about. Am I right? This SDCC 2014 edition is limited to 5,000 copies. 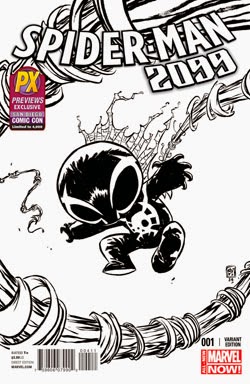 SPIDER-MAN 2099 #1 B&W VARIANT – SDCC 2014 EDITION
(W) Peter David (A) William Sliney
All-new series from the pages of Amazing Spider-Man! Miguel O’Hara is Spider-Man in the year 2099 but he’s currently stuck in the year 2014. He was stranded here by his father who is the head of an evil corporation called Alchemax in 2099. But in 2014, Alechmax has just been formed and Miguel has a chance to stop its corruption before it starts! You’d think being a man out of time would make you a man without enemies, but Spider-Man 2099 is about to discover that he’s not the only one hoping for a better tomorrow, one that might be ensured by The Adjustor eliminating Miguel from the time stream altogether! This SDCC 2014 edition is limited to 4,000 copies. 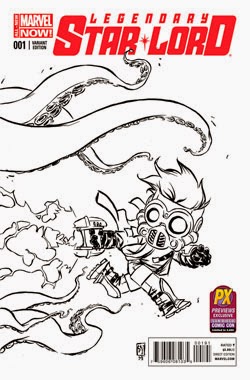 THE LEGENDARY STAR-LORD #1 SKOTTIE YOUNG B&W VARIANT – SDCC 2014 EDITION
(W) Sam Humphries (A) Paco MedinaA brand new series from Sam Humphries and Paco Medina! In this exciting first issue, Peter Quill battles the Badoon, fights to save an orphanage, and still finds time for some flirting with Kitty Pryde — but it’s all in a day’s work for the Star-Lord! This SDCC 2014 edition is limited to 5,000 copies. 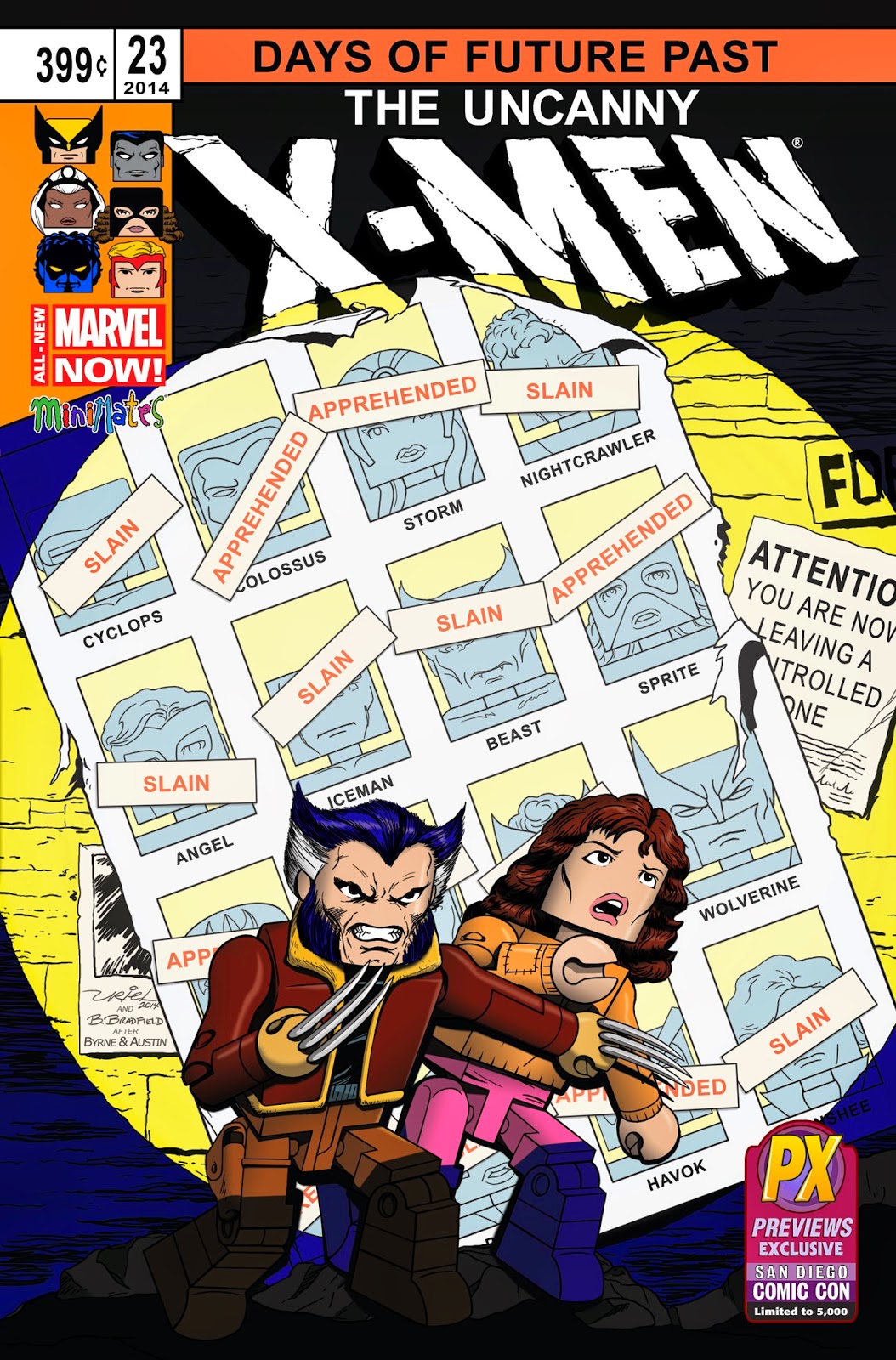 UNCANNY X-MEN #23 MINIMATES VARIANT – SDCC 2014 EDITION
(W) Brian Michael Bendis (A) Kris Anka
An Original Sin tie-in! Charles Xavier’s last will and testament is discovered. But is something concealed within the pages that might be the X-Men’s ultimate undoing? This SDCC 2014 edition is limited to 5,000 copies.